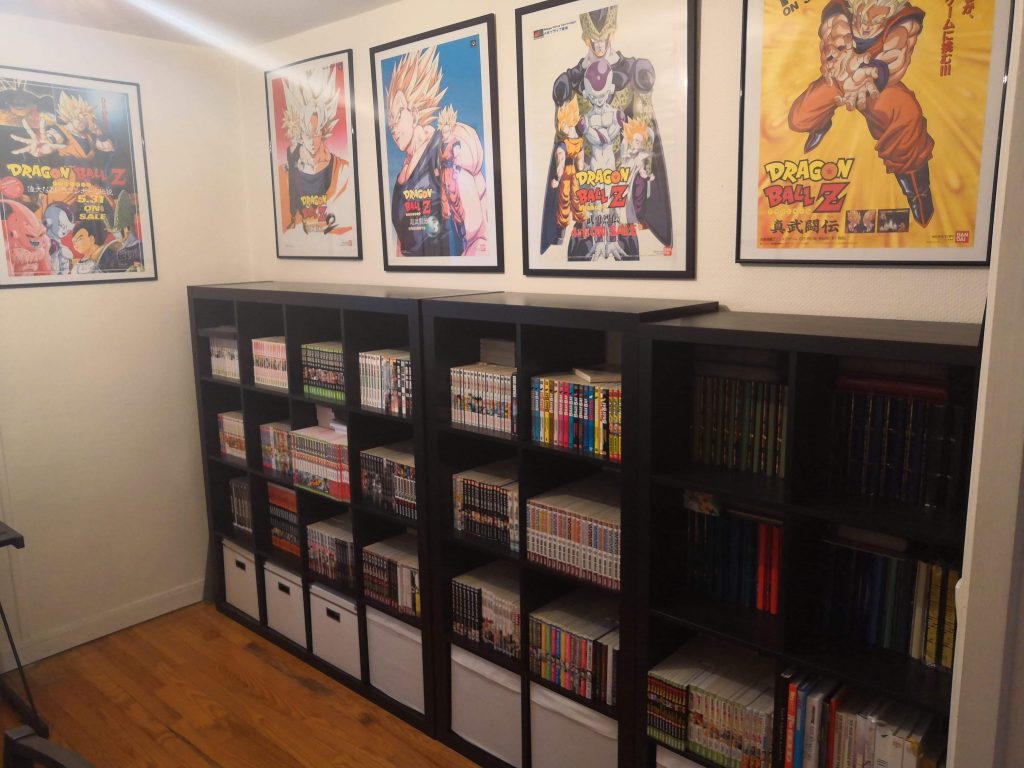 Collectors life is often full of pitfalls. And, indeed, it was for me.

My name is Guillaume, I’m 33 but everyone calls me Bob in reference to this small sponge-shaped yellow character that ties my hands since this notorious summer 2005 night (I won’t tell more). I am from the Club Dorothée generation, a leading TV program for youth, which encouraged me very quickly to like japanese animes. The most famous among them, Dragon Ball, sweetened my childhood from 1990 to 1996 and made me want to collect all licensed products very quickly. My first memory of Dragon Ball cards goes back to 1995. I was in fourth grade and I still see myself buying Trading Panini part 1 boosters (blue borders) at the newsstand fifty meters from home. The few francs I was given thanks to a good report card, some home chores done or birthdays were spent almost exclusively on cards. The famous Panini part 1 then later the French Super Battle part 12 (the famous Power Level), then the part 13… are a few examples that illustrate, still today, this passion that has escorted me for almost twenty five years. By the way I still have a story I like to remember from time to time. Indeed, collecting can sometimes be very cruel, especially during all my fourth grade when I was desperately searching the trading card Panini part 1 number 34. I even hired « detectives » who were looking for this grail during class breaks in exchange for some doubles. Unfortunately, I didn’t find this card and it’s much later in 2010 on a famous auction website that I completed this more than fifteen years old collection.

Along with cards, I was collecting Dorothée Magazine too, that I bought when I had some ten francs coins left and liked the cover.

I collected until 2001-2002, which equals more or less to the beginning of the long years of paucity when no card was delivered in France. My hobbies and the beginning of my high school years will put this passion on hold too. By the way, I sold a part of my collection during this time, while keeping my rarest pieces in a big Panini card holder. It’s only in 2008-2009, just a moment before the launching of the Dragon Ball Kai anime, that I really got a foot on the ladder (the Card Game relased in 2005 and the V1 of DBZ Collection didn’t give me the will to start again). The website DBZ Collection was a driving force in this resumption since I immediately met collectors up to date with the latest Carddass news  (Juju93100, Rk1, Tantale, SSK, Rastali and many others I surely forget), who helped me sorting out my cards and who kindly guided me in the Carddass world. Most of them are still good friends today.

By the way it’s good to remind that at this time, it wasn’t rare to make good deals on the Internet (Dragon Power full set for 80€) and that the prices offered were far below from what’s used today. For me it was the golden era of Carddass and of the DBZ Collection message board with its famous shoutbox where everyone could chat live and when we met again on MSN for trade sessions. It was also the time when I started to meet IRL other parisian collectors, when we went chilling out in the few parisian stores which were still selling cards (Konci, Manga Shop…) and when I made my best collector deal (limited Gold PP for 115€ cash). By the way this item is still the masterpiece of my collection. Other IRL meetings (this time in the provinces) allowed me to meet collectors across France too (Sulfura, Therealestat, Jeanphi85, Zilbah, Gokan, Yinyin…).

It’s between 2009 and 2015 that I bought a main part of my current collection. Prices allowed buying without being ruined, the yen was not very high and my personal situation enabled me to have a Carddass budget each month. About cards, I try to collect full sets and I struggle to complete the missing cards to my collection when I find a good deal. I prefer cards known as old gen (before 2000), but I enjoy some collections known as new gen like Morinaga Wafer or Gumica to name but a few. So I won’t surprise you by saying that PP Cards are my favorite cards.

Having expanded my Carddass knowledge by the years, I wanted to share this through my Twitter account (nickname @BoblpongeBall) where I try to bring with a few words and pictures as many pieces of information as I can about my collection and the Carddass world in general. It’s not rare that I overflow a bit with magazines, fancards of Dragon Ball news. I am also a member of the Carddass Social Cast, a podcast about Carddass. I also write articles on Adali.fr, the website of my lifelong sidekick Juju, from time to time.